Today we are celebrating Kim Kneen. Since 12 Short Stories started in 2017 we’ve seen many of our writers go on to publish and accomplish great things with their writing. The Prompt to Publication emails are all about celebrating these writers and their wonderful stories.

Kim Kneen: Yes,  definitely – the discipline of working to deadlines is crucial. As our book was collaborative, being able to agree upon and meet deadlines was paramount.

Additionally, reading a wide range of short stories in various genres and styles with the intention of providing critique can only be a good thing – becoming ever more aware of what makes a good story a great story. Having the opportunity to sit back and regard stories with a cool gaze, taking the time to consider carefully what might be done to improve a piece is a skill transferable to one’s own work. Equally, becoming accustomed to accepting and acting upon critique is vital. Winning the Readers Choice category in the 12SS annual competition was a great confidence boost. The prize was a skype session with Mia and the advice she gave me was pertinent – I still find myself mentally revisiting the tips she gave me 2 years later!

Kim Kneen: The favourite story I wrote was ‘Saltwater’ (Reader’s Choice prizewinner in the 2018 12SS competition). This story evolved out of Mia’s prompt ‘The Cottage’ and was the tale of a girl coming to terms with the loss of her father at sea. 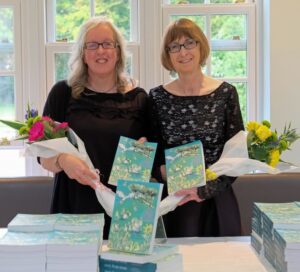 Kim Kneen is a short story writer who lives on the Isle of Man. She is a previous winner of the Manx Litfest Short Story Slam and has had success in local and international short story competitions. Kim has a CIM Professional Marketing Diploma and a BA (Hons) in Textile Design. Her lyrical stories are often inspired by the Isle of Man, its people and its past. Kim lives in Ramsey with her son, partner and sighthounds and like generations of local children growing up was terrified of ‘The Spooky Church’.

Read an excerpt from Kim’s book.

In our local town is a deconsecrated ‘Graveyard for Strangers’. Taking names from headstones and old burial registers, my co-author and I researched the backgrounds of some of the 1000 people buried there over a four century period. Our book consists of 40 stories that bring our strangers briefly to life, each story inspired by a moment, often real, sometimes imagined, but always rooted in fact. Each story is accompanied by an illustration and factual piece.

Claudius Bennet, Chief Constable and Court Keeper of Ramsey, tries to get a fire going in the bedroom grate with a few lumps of coal he’s brought from home. Although it’s almost Midsummer, the evenings are chill and the sheets covering the man are thin and of little comfort. The proprietor’s charity extends only so far; three shillings’ worth it seems.

A cloud of foul black smoke puffs into the room. Claude covers his mouth and straightens up, his other hand on the small of his back. Damn cheapskate probably hasn’t had it swept in five years he thinks and decides, tomorrow, he’ll ask his wife if she has a couple of woollen blankets they can spare and bring those instead.

“Your clothes, sir,” he says to the man. “Took them home and my wife, Mary, she washed them. Hung them on the back yard wall to dry and she’s done a bit of mending. Good as new, for when you can go home.”

The man on the bed groans and the fingers of his right hand flicker. His breathing, already rapid, seems to quicken.

Claude hangs the man’s trousers from the handle of the chiffonier and feels no guilt at the little white lie. It is a kindness. He pulls the drapes across the window, so the late evening sun doesn’t fall on Edward Shackell and a shadow crosses the stranger’s face. Claude hopes the man’s wife will get here soon. Surely the letter has reached her by now.

Claude runs a finger around his collar.

“Two years on and I still can’t abide the damned uniform,” he tells the man. The dark blue cloth is stiff and itchy in the heat and the horn buttons too showy by half. “I don’t mind telling you I kicked up a stink, but still they wouldn’t back down. And then my Mary went up like a bloody chimney and I had to put up or shut up, because, well, it’s the only thing I’ve ever been good at, except fathering children of course.”

“A houseful,” he tells the stranger and reels off their names and ages, anything to fill the silence.

He tells Edward about the years he spent in London, a conductor on the railways would he believe? And how much he hated it, every morning hawking up black phlegm from the smoke. He tells the man he brought his family back to the town of his birth, for the sake of their health too, and for a simpler life. Claude confesses his disappointment at his own shortcomings, how the little farm he’d taken on was a disaster, the animals harder to handle than any drunken fool he’d locked up.

That reminds him. He rummages in his pockets until he hears the reassuring clink of metal on metal. He has taken the man’s possessions for safekeeping. He doesn’t trust the lass that works here, the one with a pinched little face like a half-starved ben-varrey and fingers slippier than skinned eels.

He pulls the stranger’s keys from his pocket and inspects them, one by one. Claude has always been fascinated by keys, by what they represent; a means to keep people out and people in, guardians and revealers of secrets. He wonders what this bunch of keys could tell him about this Edward Shackell of Carmarthen and he weighs them in the palm of his hand.

Claude finds his gaze drawn back to the chiffonier, to the man’s trousers and the bold splashes of red that Mary was unable to wash out though she scrubbed at the fabric as hard as she dared. It is paint, he realises, from the paddles on the Fairy and it fair glows in the dusk of the room. He crouches beside the bed and gently envelops the stranger’s right hand in both of his.

A tune comes to mind, a ballad by Brahms or some such. He hums the few lines he knows, and Edward Shackell turns his face towards the sound. Chief Constable Claudius Bennet stares at the red paint, until all the other colours in the room, everything that was once bright and cheerful, slowly fades along with what remains of the light.

Edward William Shackell was born in Clerkenwell, London in 1821, his father proprietor of the John Bull Sunday newspaper.

Aged 20, Edward married Welsh woman Mary Gibbon Davies, the daughter of a watchmaker and silversmith. Edward, Mary and her father were all keen amateur singers and it’s possible they met through a shared love of music.

In 1844 Edward took over his father-in-law’s business premises in Guildhall Square, Carmarthen and established a Fancy Stationers, selling ‘extremely elegant articles, procured direct from the metropolis’. He was active in the community, respected and extremely well liked.

In 1854, the Carmarthen Assembly Rooms opened and Edward took on the lease. This grand public facility had capacity for an audience of six hundred and was used for plays, balls, lectures and other entertainment. There can be no doubt Edward was a high achiever and a perfectionist, once admitting he ‘never failed to succeed at anything he undertook.’

In the summer of 1857 and suffering from an ‘impaired mind’, Edward was advised to spend time at the coast for the good of his health. At some point on their break, Edward gave his 16 year old son the slip and in Liverpool boarded the Manx Fairy which was bound for Ramsey. As the steamer was midway through the crossing, Edward rose from his seat on the deck and jumped over the side. A crew member raised the alarm, the engines were stopped and a small boat lowered over the side. After twenty minutes, Edward was recovered from the water, but not before he had been struck by the paddle wheels, suffering two broken legs, three broken ribs and punctured lungs.

Upon reaching Ramsey, Edward was taken to a house in Mona Street where he received medical attention and told the police his name and where he was from. He had three shillings, a watch and a bunch of keys upon his person. A letter was sent to his wife, but Edward died four days later, before family or friends could reach the Island. An inquest found he died due to ‘injuries caused by temporary insanity’. 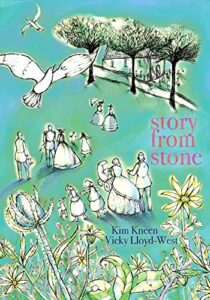 Print books can be ordered by emailing storyfromstone@gmail.com