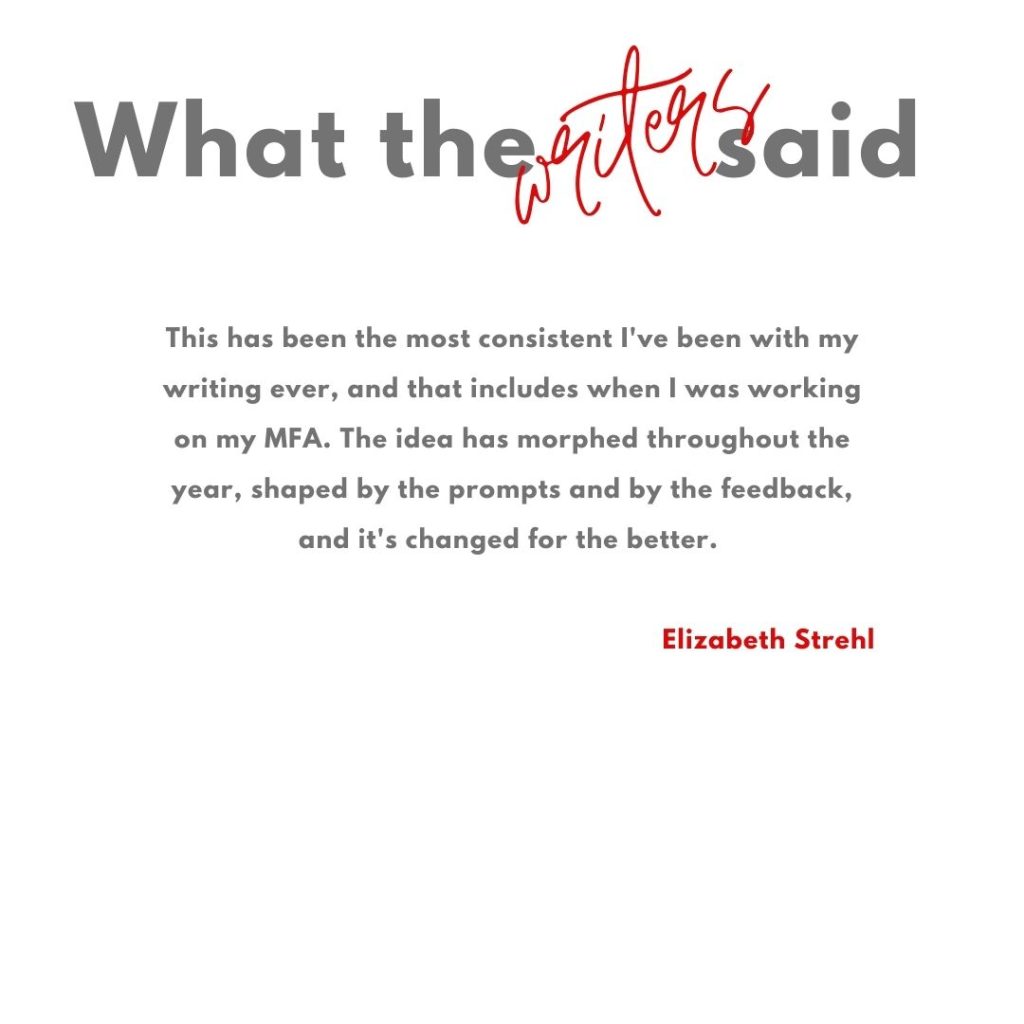 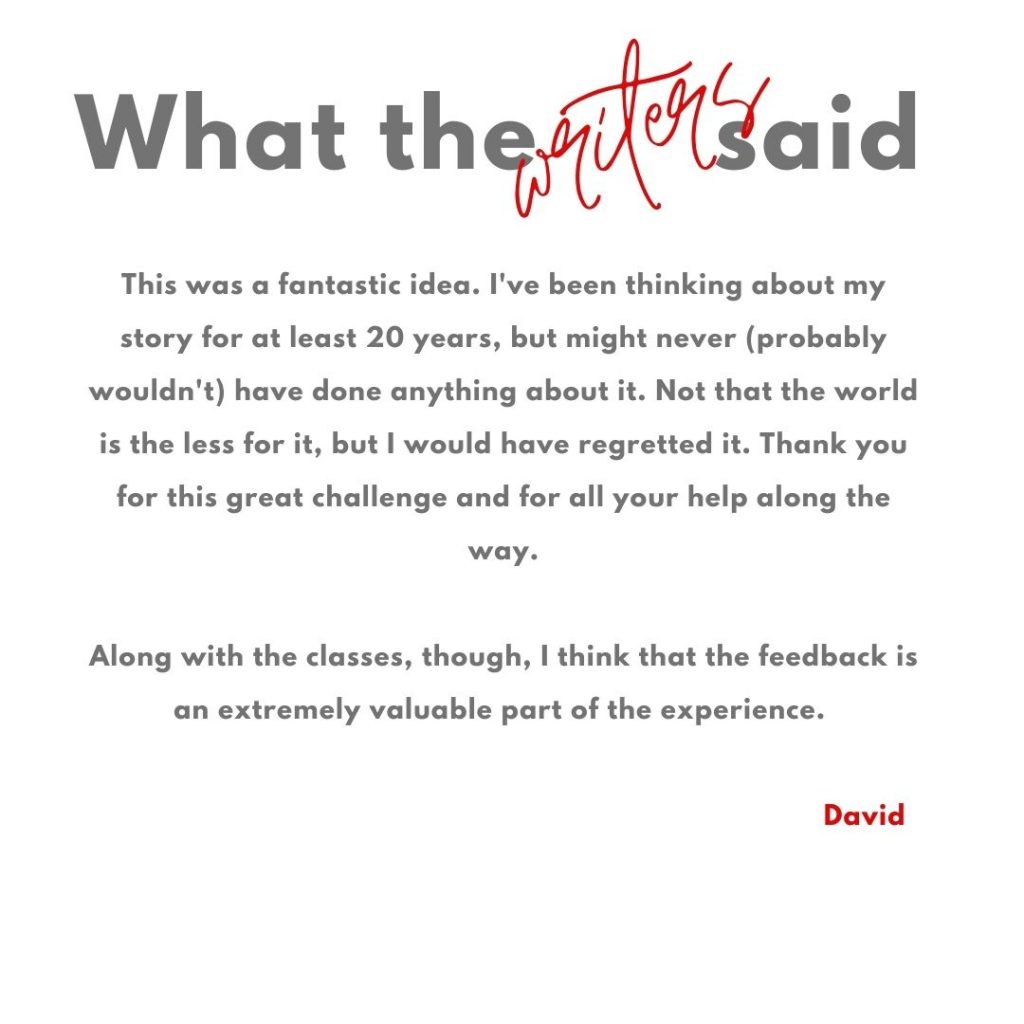 Deadlines are my anchor. They’re the difference between desiring to become a writer “when I grow up” and actively being an author. I am proud to have accomplished the goal of weekly scene submissions over an entire year. Participating in the 52 scenes challenge has been a positive experience, never once have I regretted signing up.

My personal journey consisted of converting a rough Nanowrimo manuscript into a longer, more polished manuscript with weekly feedback from six loyal followers. It’s almost complete–ready to be pushed into a drawer for a month before being another round of rewriting, again anchored by deadlines. A pleasant surprise along the way was the privilege of reading six amazing novels as they were being created, encouraging these writers and influencing their stories.

Mia says she doesn’t want our best work, but our bravest work. You just need courage to show up for your story. You’ll be amazed where your characters, some of which you haven’t even met yet, will take you.

I am grateful for Mia and my writing community.

I have participated in NaNoWriMo (National Novel Writing Month) several times and I have an MFA in creative writing. Neither experience had me writing as consistently as 52 Scenes has. For the first time, I’m on a regular schedule: compose on Saturday morning, review on Wednesday before posting, brainstorm around the new prompt, repeat. Initially, I was reluctant to join because of the prompts–who was Mia to guide my novel in such a way? I decided to just ignore them, but they are slippery little suckers and I found myself working them in without much effort, sometimes accidentally. The weekly word or short phrase has forced me to think outside the box and take my novel in directions I would have not otherwise ventured. Between the prompts and the weekly pacing, I find that my writing is more coherent, more creative, and more personally satisfying. I’m writing frequently enough that I don’t lose track of my own story but not in so crammed a fashion that the plot spirals out of control. Also valued is the community online. I have three or four other writers I follow. Although I’ve never met any of them in person, I’ve gotten to know them through their writing and have enjoyed seeing their novels take shape. Our journeys and processes are all so similar yet so different. The interactions are entertaining, enlightening, and illuminating. I wholeheartedly recommend 52 Scenes for anyone wanting to establish a firm writing routine and strengthen their craft. 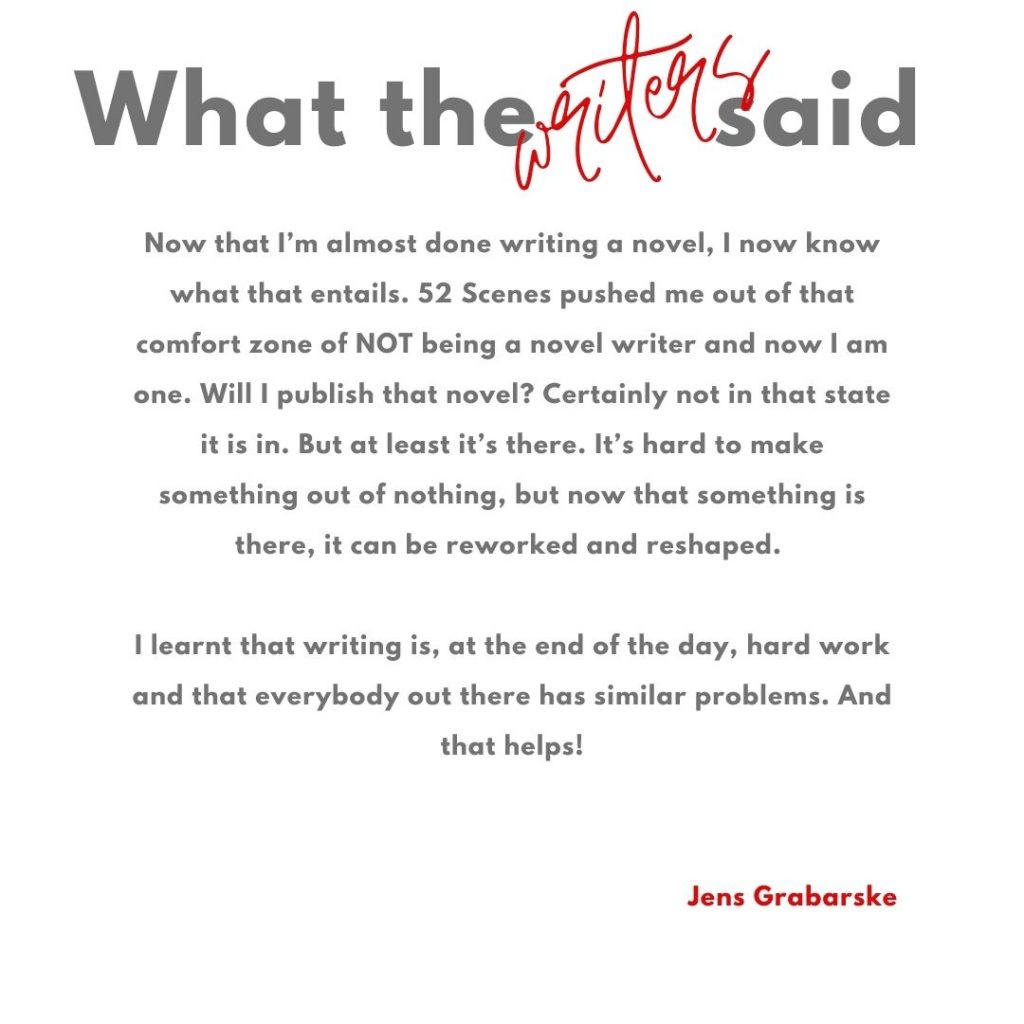 If you’ve ever wanted to write that big story in your heart but don’t know where to start, this is the challenge for you. With only a rough idea of my story, this was enough to get started. Having a weekly deadline pushed me to fill the page; and having a cohort of writers also writing their novel—their feedback and support kept me from giving up. I didn’t think it was possible to get as far as I have and this course made all the difference. As a professional copywriter by trade, one would think it would be easy to make time to write after work hours. If not for this challenge, I’d still be procrastinating. Stop thinking about your novel. Join this course and not only will you write it, but also you will finish it. Oh! And the fun you will have!

I would totally do it again. 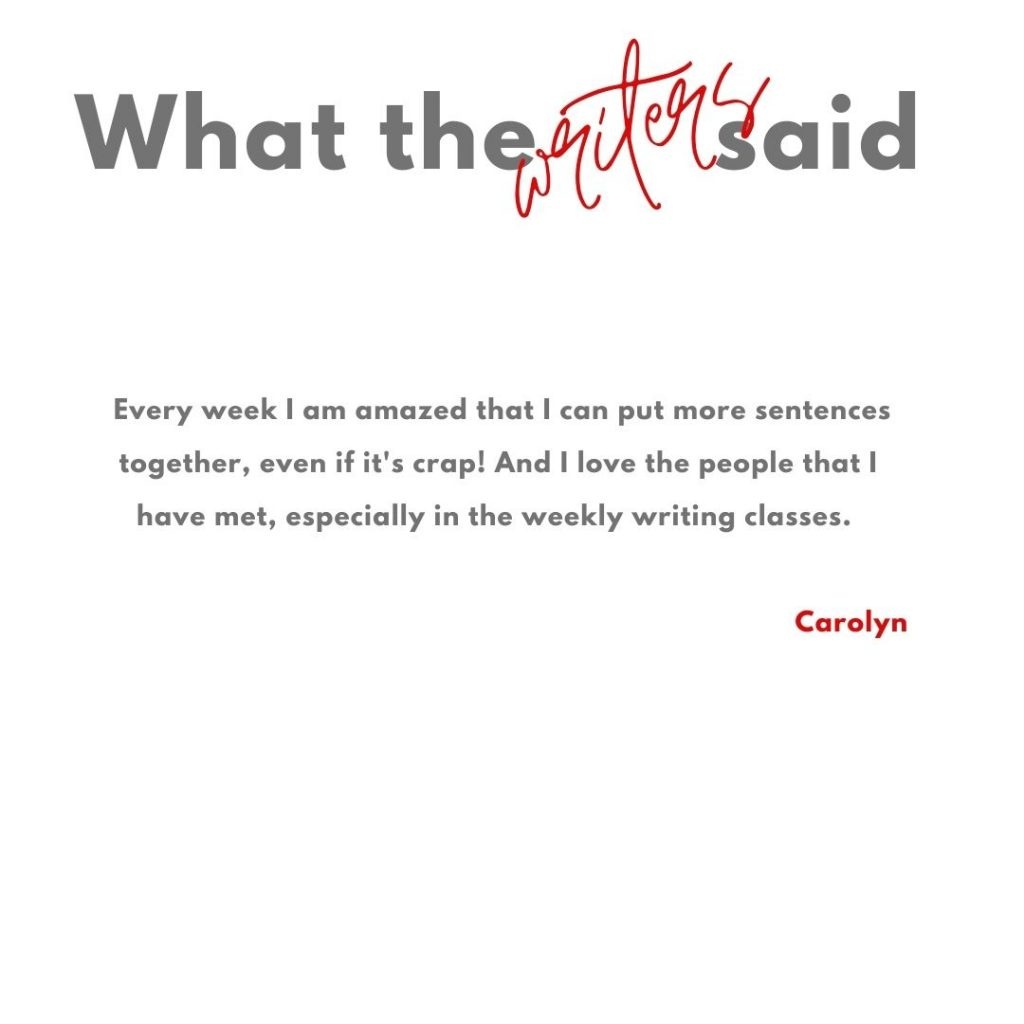 Had I not joined the 52 Scenes in 52 Weeks Challenge, I doubt that Clarissa would have lived to see another day. It was the weekly challenges, the comments shared generously by an astute community of writers that allowed me to grow the first draft of my novel Tin’s Bended into a fuller work. A literary beach read, Tin’s Bended shows the evolution of a woman encountering herself.

I wrote the first draft years ago, packed it away in a desk drawer, then a moving box, and for a while a tote bag, moving it from Maine to New Hampshire to Florida, where thanks to Mia, and the community of writers she assembled, I, a reluctant writer, gave myself over to writing, finding the fun in it.

Having readers comment on a weekly basis taught me a great deal and instilled that reader in my head as I made choices. Those comments kept me honest, nudged me, and encouraged me to continue. The original manuscript changed some as I reworked the first half, but it was toward the final scenes, seeing the threads never tied in the original that I deviated from the original, creating new scenes with new characters appearing.

I would recommend this platform and this process to anyone wanting to write a first novel or improve a draft of one already written. The timing of the classes, which broaden your perspective on the art of writing, worked well for me. And the group writing sessions were a pleasure, putting faces to names and building a sense of camaraderie.

52 Scenes was a Godsend! I’d been fiddling around with the novel for a couple of years. I’d even written the first few chapters. A light skirmish, nothing more. Advancing further into unknown territory was being impeded by the procrastination dragon jealously guarding the cave entrance! I had bolstered my weaponry with a very basic plot outline. I knew where it started and where it ended. Vital supplies of discipline were being devoured with glee by the motley beast.

I had once tackled the Beast of BTSOMP (by the seat of my pants) and vowed never to do so again. But that was a winged brute, with fangs. Intense plotting suits my battle-strategy nature. 52 Scenes forced upon us a different type of battle mindset. The final word limit of 80 000 words, and a weekly count of 1200 – 1500, meant spending the dark winter plotting was out of the question. Writing needed to be done. I couldn’t afford to run wild with a Cecil B DeMille size cast or a thousand sub-plots. The ferocious and devouring deadline was fast approaching. The urgency of the impending battle enabled me to write BTSOMP, and to stick to the ending. And now, thanks to 52 scenes, I have nearly finished my fourth book. It may become a series.

The idea that scattered across the known world, other writers were also hunched over their vellum, scratching out their tales by the light of earwax candles, a cat strapped to their shoulders for protection against imagination ghouls, was inspiring. As was breaking radio silence for feedback each week. It’s given me a new understanding of why Charles Dickens wrote serialised books. It has my vote.

Employing my short story strategy – only writing on deadline day – made the adventure more challenging than it probably needed to be. If the day had been a tough one fighting marsh monsters, bringing myself to the boil to create 1500 words, often needed more chocolate cake than I had in the tower. Especially when what the next chapter was about eluded me.

Although bog monsters sometimes kept me from attending each one, I enjoyed the classes and the writing sessions. Quite a different experience from writing books alone. I’m looking forward to reading the other writers’ final dispatches from the field.

Would I do it again? Hell, yeah!

Dedicated time set aside, no excuses, is the only way to get that book written. It also builds confidence and sharpens your writing weaponry.

I have been living with Fran for over ten years. She inhabits my head, has an entire drawer of my desk to herself and several gigabytes of space on numerous flash drives. Fran is the heroine of what has been a perpetual WIP. In December 2020 I  made 52 Scenes in 52 Weeks my last chance saloon to finish the manuscript. I never imagined I could do it and even had the 4 reprieves up my sleeve every week just in case. Surprisingly and thankfully, I haven’t needed a single one, and so, almost one year down the line I have those magic two words and six letters in my sights. THE END.

My plot has changed significantly and definitely for the better, thanks to the many ideas and suggestions I received in the feedback from other writers.

I have learned such a lot about myself and how far I can really take my imagination and creativity.  I have learned about the discipline of writing a whole novel. Yes, a WHOLE NOVEL! Well, the first draft of one…The entire experience has been immensely rewarding. I have also been following more than 10 other stories every week and dipping in and out of others, including genres I don’t usually read, so that has also taught me a lot about other people’s styles and approaches to writing. Well done to Nonie, Adam, Ben, Michael, Nina, Monica, Becky, Susanne, David, Lionel, Preston, Jan, Eva Maria, Marijo, Sudha, Anne…you are all amazing and you all helped me in some way. Oh, and special thanks to MIA!!! 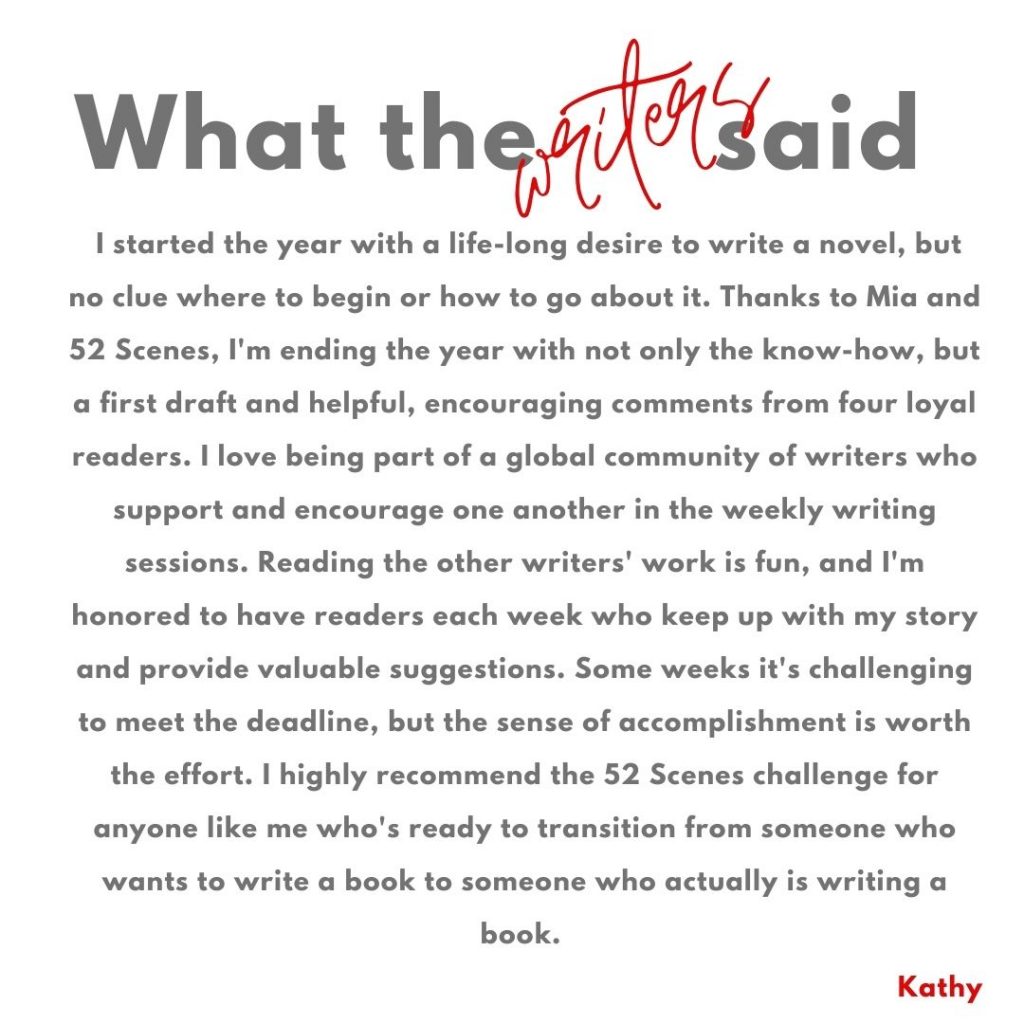 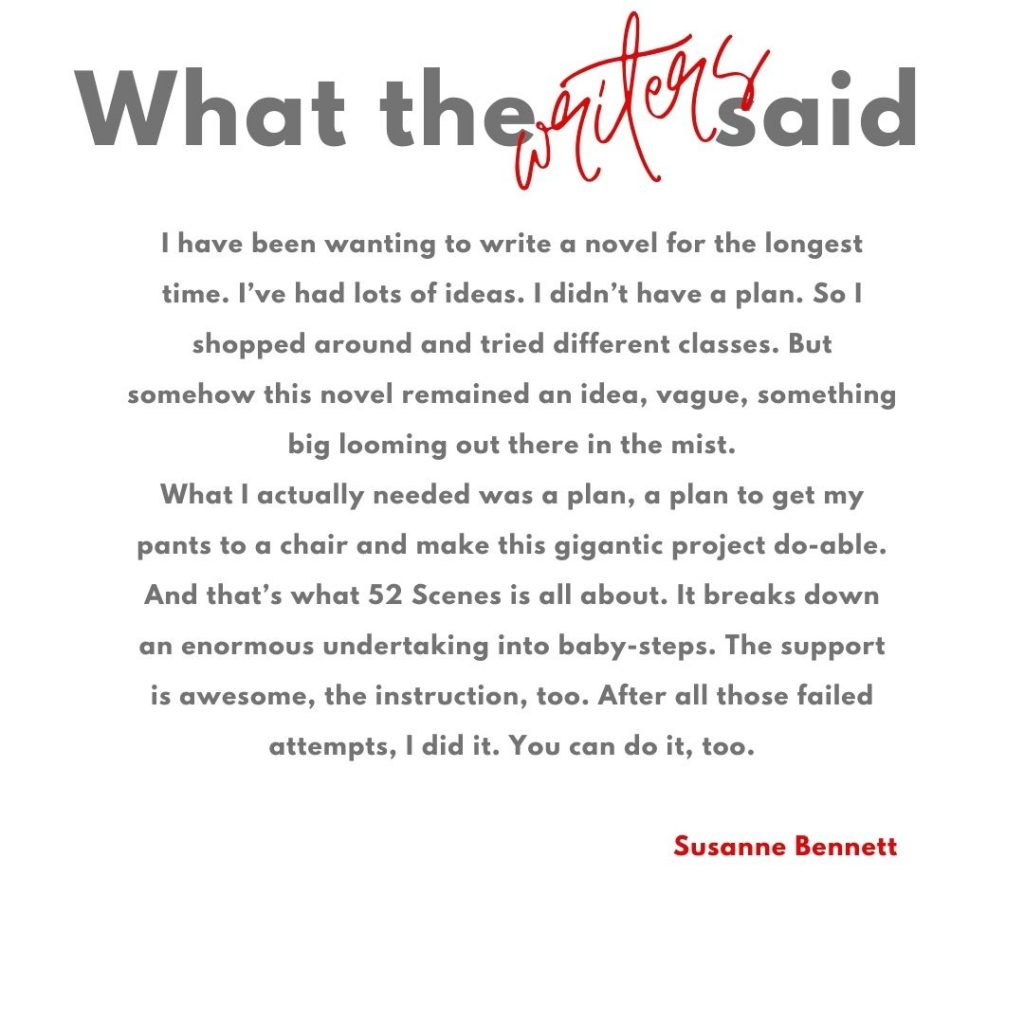 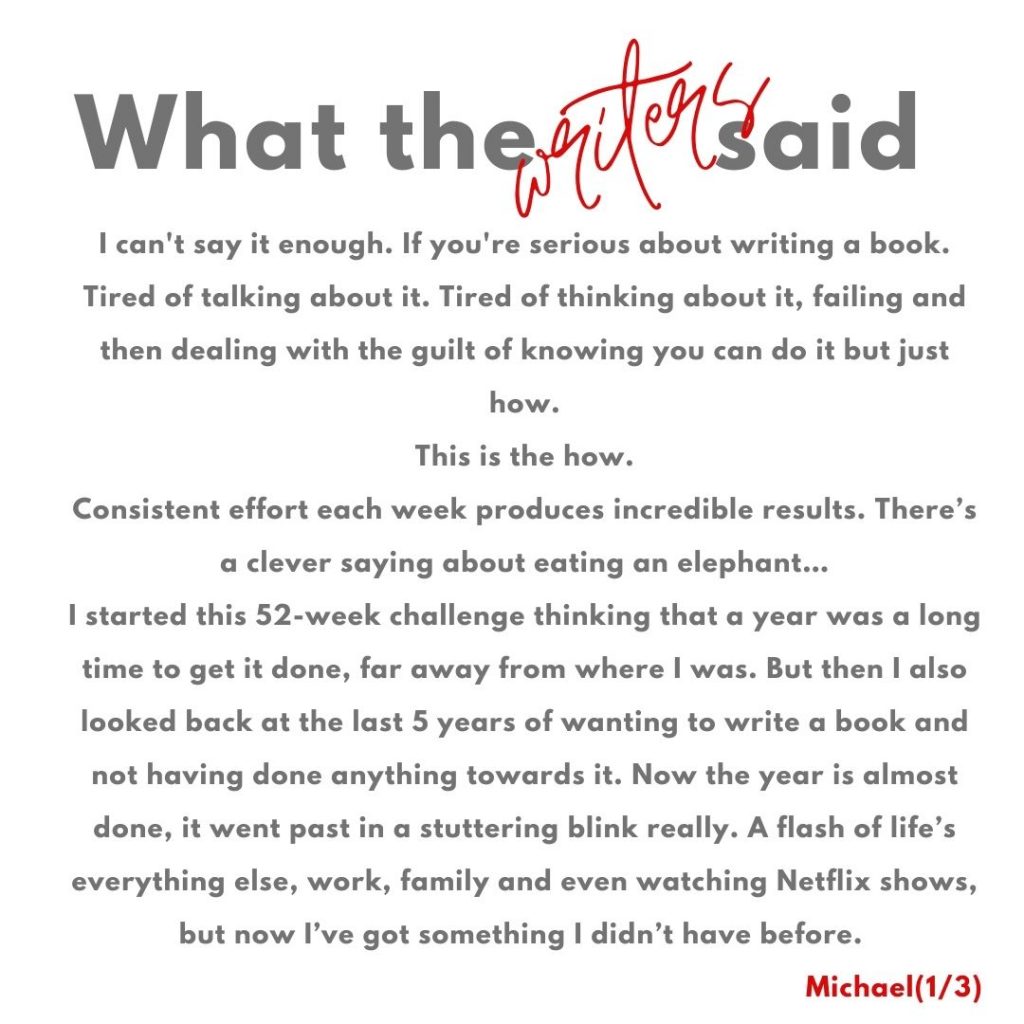 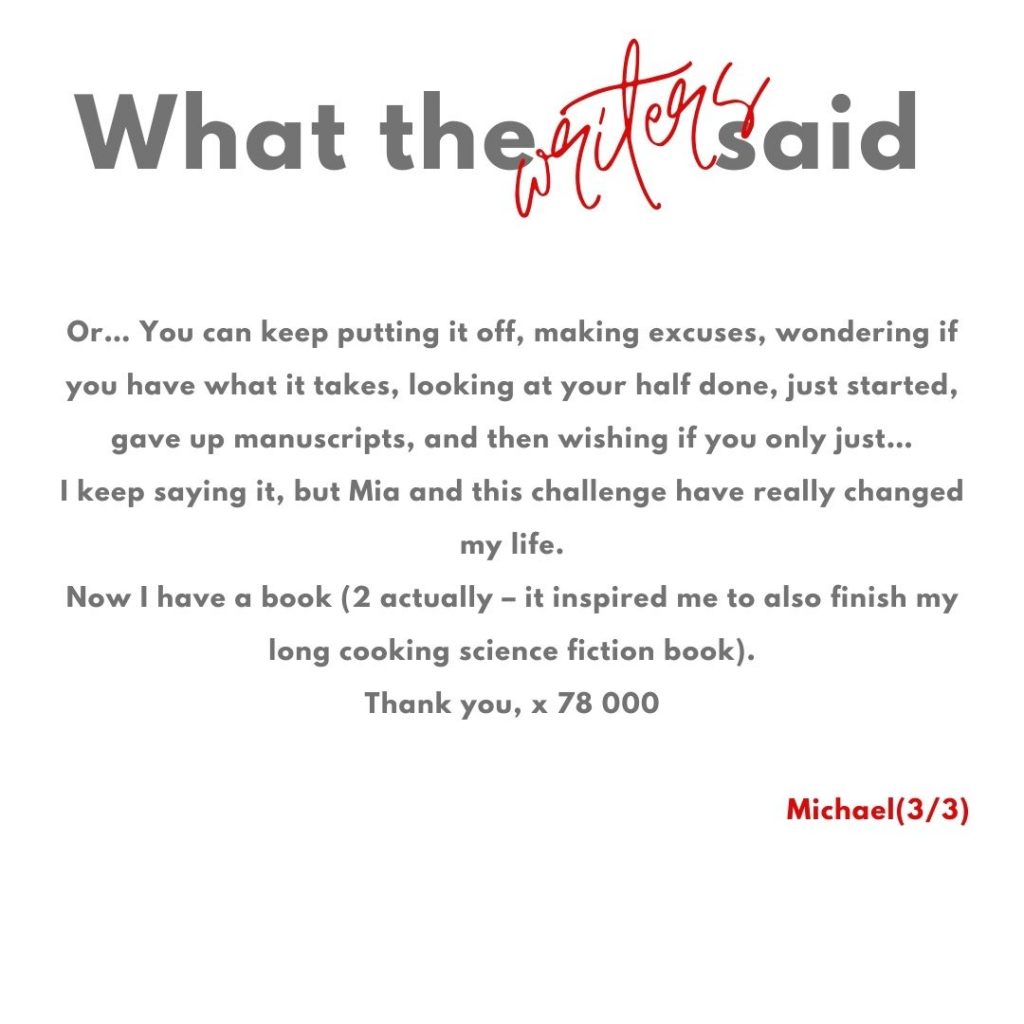