Today we are celebrating Melanie Delaney. Since 12 Short Stories started in 2017 we’ve seen many of our writers go on to publish and accomplish great things with their writing. The Prompt to Publication emails are all about celebrating these writers and their wonderful stories.

Have you completed the 12SS Challenge?

Melanie Delaney: I completed 12SS for the first time in 2019. I struggled with health issues early in 2020, but once the brain fog cleared I again took on the challenge and am now only four stories away from that elusive second badge.

Melanie Delaney: Participating in 12SS helped rebuild my motivation and confidence, after taking a break from writing for several years. Without the support from everyone in the group, I doubt publishing would have returned to my agenda.

Melanie Delaney: I have just published my first novella, Reflections of Love – Hannah, with five more to be released over the next five months. All began as short stories in 12SS.

How did 12 Short Stories help you?

Melanie Delaney: 12SS helped me with fabulous feedback, that I took in and applied to my work. Also, giving feedback helped me with my own editing process. I love the format of 12SS as deadlines make me accountable and the prompts give me a challenge.

Taya Rune is a member of the Romance Writers of Australia. She writes mild to steamy romance. Her settings and characters range from the every day to the fantastical. Taya has all your romance needs covered.

Read more about her book. 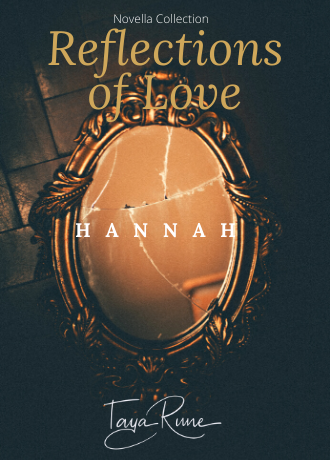 While out for dinner with her husband, Hannah’s life is changed forever. With the help of old and new friends will she be able to heal and rediscover her identity to find love again?

What is your favourite story that you wrote on 12SS?

My favourite 12SS story is my first one. I was experimenting with writing romance, having only written fantasy and children’s books. I received positive and helpful feedback that was invaluable. I look at the story now and see the faults, but am still proud of what I produced. Read Reflections of Love.

The harsh fluorescent light of the restaurant bathroom reflected the betrayed face of Hannah as she attempted to stop herself from blubbering. She took in large gulps of air and splashed bracing, cold water on her face, not caring what would happen to her perfectly applied make-up. Nothing worked. She sobbed. Hannah’s shoulders shook as she sank to the floor, not caring who walked in or if the floor was dirty. The scene played over in her head for the twentieth time.

Hannah had been sitting in the trendy Egyptian restaurant, in the heart of Sydney, waiting for her husband of six years. She had spent the afternoon in the salon getting her fiery red hair blow-dried and it now sat perfectly, framing her oval face. Hopefully, he would notice the effort she had gone to, as he always complained that she wasn’t taking care of herself. She sipped on her cosmopolitan, feeling self-conscious, and attempting to look relaxed as she surreptitiously checked her phone every few minutes. The belt that cinched her pretty floral dress was becoming uncomfortable as she perched on the barstool.

Luke had finally arrived nearly an hour late. She watched his interaction at the door and felt ashamed with the brusque manner he showed as he handed over his coat and briefcase to the Head Waiter. It wasn’t only her he treated condescendingly. He sat next to her, at the bar, without any acknowledgment of her presence. Luke ordered a shot of single malt whiskey and a Gin and Tonic without enquiring if she would like another drink. Without a glance in her direction, he downed the shot. Finally, he spoke, “Hannah, you could have worn a more appropriate dress. What happens if we run into one of my colleagues? You look like you are going on a picnic.”

Hannah was crestfallen that he hadn’t noticed her hair, but was not surprised that he had found fault. It was typical Luke behavior. Once all he had given her were compliments, but that felt like a lifetime ago and now he only detailed the perceived flaws.

He looked at his expensive, Rolex watch that she had given him for Christmas as if preoccupied with something, and then took a long drink from his G&T. “I want a divorce.”

Before she could register what he had said he plunged on. “It’s a cutthroat world out there and you just aren’t suitable for it. I need a go-getter. A woman who is as ambitious as I am, who wants to be by my side, hosting dinner parties, and after five functions. Networking, not crafting and crocheting, like an old woman.” His voice was derisive.

When did being calm, reflective, and creating with your hands become bad things, she thought absently. Though she hadn’t made anything in years because he had made fun of her every time she had started a project. Her brain attempted to process what Luke was saying. Everything was happening too quickly, it was like the remote button was on fast forward.

“I don’t want to end up like him, stuck in a job going nowhere.” He waved his hand dismissively at the attractive bartender, who was cleaning glasses at the other end of the bar. She guessed he was in his mid-thirties, only a few years older than Luke.

“I have to grasp my chances with both hands before they slip away. There is a big promotion coming up at the bank and I need a sophisticated wife with style, who can engage people in conversation without putting them to sleep.” Luke sounded so matter-of-fact as if discussing the next car he was thinking of purchasing.

Hannah looked at Luke, she had loved him deeply once. His five-feet, ten inches muscular frame from hours in the gym had turned her on. His large grey eyes that had looked at her with adoration had won her heart. And she had willingly shaved his head; running her hand along the smooth surface had once been an aphrodisiac. That love and desire had shattered years prior when the cruel jibes and confidence destroying remarks began. Now she was a shell of her former, friendly, funny self, doubting every decision she made.

She had fled to the bathroom when he had ended his speech by telling her that he had never truly loved her and that their entire marriage had been a mistake.

Eventually, the tears subsided and she pulled herself up off the bathroom floor. Her head swam with what Luke had just done, but she was confounded that underneath the shock of the situation that she wasn’t surprised at how callous he had been or that he had chosen to do it in a public place. He had been growing nastier and more distant over the last few years of their marriage, but she had been too scared to leave and start again. He had told her for so long that she was useless, that she knew it had to be true.

Her blue eyes were red-rimmed and itchy, and she had streaks of mascara upon her blotchy cheeks. The buttons of her floral dress and the neckline were askew from the dramatic slide down the tiled wall earlier and her pale neutral lipstick was completely chewed off. Hannah assessed the mess and decided that the best she could do was scrub her face clean with water and tissues and the only way her eyes were going to stop itching was to remove the contacts she wore and put her glasses back on. Thankfully she always carried tissues and her black-rimmed glasses in her bag.

Once she was barefaced, with only a hint of lip gloss, the bespectacled Hannah texted her best friend, Amy, to ask if she could spend the night. She knew it might take a while for Amy to get back to her, she wasn’t great at checking her phone once she got home and put on Netflix. Hannah stared at herself in the unforgiving light of the bathroom mirror for a few moments, trying to ignore the romantic song being piped through the stereo system. She decided to go out and face Luke.