Today we are celebrating Audra Russell. Since 12 Short Stories started in 2017 we’ve seen many of our writers go on to publish and accomplish great things with their writing. The Prompt to Publication emails are all about celebrating these writers and their wonderful stories.

Audra Russell: Absolutely. I originally tried to get my book published via the traditional route. But after I was told that my story wasn’t “realistic,” I decided to self-publish. The encouragement and feedback from my writing comrades in the 12 Short Stories group gave me the extra push I needed to self-publish my novel. 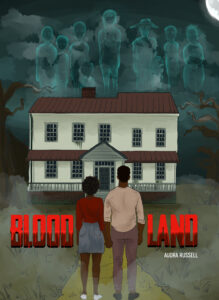 Audra Russell: One of the short stories I wrote for 12 Short Stories, Morbid Curiosity, was published in a short story anthology called Exhuming Alexandria. That was my first officially published work. In August, I celebrated my 50th birthday by publishing my debut novel, Blood Land. It was a 3-year process from writing to publication, but it was so worth it!

What is your favourite short story that you wrote on 12SS?

How did 12 Short Stories help you?

Audra Russell: 12 SS helped me to see weak areas in my writing and improve them. I also learned how to read like a writer, which greatly improved my editing skills.

I applied everything I learned to my work. From watching my tenses (I tend to slip up when in the flow of writing), to being careful to show and not tell, and learning how to build suspense. Being a part of this group also helped me to learn to make every word count and that is the most valuable lesson that I repeat to myself as I write.

When I was getting tons of rejections as a writer while trying to get traditionally published, 12SS helped me remain focused on my goal of improving in my craft as a writer. I wasn’t allowed to ever give up writing because there was always a deadline to meet and feedback to give to other writers. Belonging to a group like this really centered me as a writer, allowing me to keep striving toward my goal of becoming published. 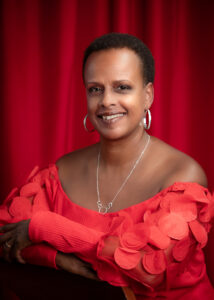 Audra Russell was born in New Brunswick, New Jersey and raised in East Brunswick. She is a blogger, freelance writer, and published author. She holds two undergraduate degrees in journalism as well as a Master of Science degree in Education. She also completed the Wesleyan University online Creative Writing Specialization course series. She writes short stories year-round and has participated in the 12 Shorts Stories in 12 months challenge for three consecutive years. Audra is an avid reader and writer’s advocate. Her passion for promoting the works of up and coming authors inspired her to create her new podcast, Between the Reads.

Audra recently had one of her stories published in a short story collection entitled, Exhuming Alexandria. She was also a contributing writer for the Writers Write and The Write Practice websites. Her debut novel, BLOOD LAND, was published on August 29, 2020, as her fiftieth birthday gift to herself.

She lives in Maryland with her husband of more than 20 years, her 3 amazing children, an 11-year-old perpetual puppy, two dueling cats, and 4 chickens.

Read an excerpt from Aurdra’s book

Theresa was pulled from her thoughts by the pinging of her phone. It was an email from Lucy, her editor.  She wanted to know how Theresa’s book idea was coming along.  Theresa didn’t want to admit another idea had gone flat.  She’d been in a writing rut for over a year now, only able to crank out a few short stories for online journals Lucy recommended.  She ignored the email and gazed out the window, watching the afternoon sun shine down on the grass.  She let out a contented sigh, pleased that she and Paul finally had their own land.  She made a note to herself to watch the patterns of the sun on the lawn throughout the day to find the perfect spot for their vegetable garden.  Something running across the grass into the shack caught her attention.

She jumped back from the window.  The air in the room became frigid. Theresa could see her rapid breathing form clouds in the air. Frost spread across the window and her teeth began to chatter.  She rubbed her arms to try and warm herself then grabbed her phone to take a picture, but the room warmed, and the window cleared before she could open her camera app. There wasn’t a trace of anything that just happened.

She ran downstairs and went to the kitchen. She opened the door and stared out at the shack off in the distance. She wanted to go to it, but her feet were suddenly cemented to the floor. The front door opened and closed. Her heartbeat pounded in her ears. She willed herself to move toward the kitchen door and peeked into the hallway. The house was thick with silence.  She felt something behind her that made a chill shoot down her spine. Her knees buckled, but she caught herself in the threshold. She closed her eyes and tried to breathe. “I’m going to turn around and nothing will be there,” she tried to convince herself. She took one more deep breath and whipped around. The ghost of the young girl was standing in front of the sink.  Theresa stumbled back into the hallway.  The girl floated toward her.  Theresa wanted to run but she couldn’t move. The ghost remained still for a second, then a hazy, gray aura began to swirl around her, making the little girl look like a small tornado. It floated down the hallway and stopped in front of the door, then swooshed up the stairs. Theresa heard the attic door open and slam shut. The sound echoed throughout the house.

Next came a little girl’s scream. Theresa put her hand over her racing heart. Beads of sweat formed on her face, and her breathing became shallow as tiny sparks of electricity pulsed up and down her spine.  A humming sound swelled in her ears and grew louder and louder, forcing her to shove her hands over her ears.

Then all at once her surroundings changed and Theresa wasn’t in the hallway anymore. It was pitch black, but she could tell she was in a very small room.  The walls weren’t visible, but their proximity could be felt.  She put her hands down to brace herself and realized the wood floor beneath her had turned to dirt.  She strained to slow her mind to try and figure out what was happening.  A hand pressed down on her shoulder and pulled Theresa from the darkness around her.  She was dizzy, unable to speak. She felt her body being hoisted into the air and placed onto something cool and soft.  A pungent scent stung her nostrils, and her eyes shot open. Two people stood next to her.  She squinted and blinked to bring her eyes into focus.  Paramedics.  Someone was squeezing her hand.  A voice that sounded far away and like it was in a tin can slowly bubbled into her ears. “Reese! Reese! Can you hear me, baby?”  It was Paul.  The hand she felt on her shoulder was his.

Are you an active, participating member of 12 Short Stories or 12 Poems? Do you have publishing news to share? Please mail mia@12shortstories.com and tell her all about it.