Today we are celebrating Amrita Sarkar. Since 12 Short Stories started in 2017 we’ve seen many of our writers go on to publish and accomplish great things with their writing. The Prompt to Publication emails are all about celebrating these writers and their wonderful stories.

Amrita Sarkar: I was introduced to the 12 Short Stories group by my friend, Joyce Finny, in 2018 – something I shall always be thankful for. So far, I have received two badges for completing the 12 SS Challenge, in 2018 and 2019 respectively.

Amrita Sarkar: In 2019, I published a novella, The Untouchables (2019). It’s available on Amazon Kindle and Amazon. I have also published a serialised story on Wattpad called ‘The Big Bong Theory’ (2017). Also, my story that won first place in The TOI Write India Contest might be published by the end of this year or next year.

Amrita Sarkar: Absolutely. Before I joined the 12 Short Stories group, I just knew that I wanted to become an author. But I had no idea how to go about it. I used to participate in writing contests, and be dejected when my work went unrecognised.

I still recall the day I published my first story for this Challenge. I was a bundle of nerves as I sat before my laptop, pondering whether to press the Submit tab.

But when I read the first comment for my story, I was taken aback. The kind of encouragement I received was unprecedented. I still cannot explain the gush of emotions that coursed through me that day. That confidence kept growing with every story, and eventually, it led me to publish my first work on Amazon.

Discipline – something that is of cardinal importance to succeed in any profession. Writing is no different. The format of the Challenge, the prompts, deadlines, and word count – all of it contributed towards making my writing tighter and effective. Now, I constantly think of ways to find one word to substitute long descriptions.

This is a platform where you get exposed to other people’s work. You learn about different cultures, styles, and perspectives as you read their stories. That boosts one’s learning curve immensely. I learned to experiment with different genres, step out of my comfort zone. There is a kind of creative freedom here that you don’t find anywhere else.

Also, this is a great testing ground, where you can introduce a sliver or wodge of ongoing work. Based on the response, I revised and rewrote parts of my stories.

The best thing about this Group is the people or my fellow writers. I think the fact that we read each other’s work and exchange our opinions about our writing – that’s invaluable. Since the members come from all over the world, their feedback helped me see things from a different perspective and inculcate the same in my work.

Amrita Sarkar: Picking one story from so many is like choosing between one’s kids. But if I have to mention one, I would go for a story called Homecoming 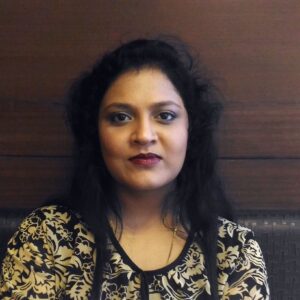 I am a writer based in India and at present, in Kolkata. For me, stories are my flights of fancy, an outlet to satisfy my errant imagination.

My writing journey started in 2017 with my first serialised novel, ‘The Big Bong Theory’ on Wattpad. Thereafter, I participated in the Times of India (TOI) Write India Contest, Season 3, where my story was selected as the winning entry for the Clare Mckintosh contest.

In December 2019, I published my first novella, The Untouchables, which is a murder mystery based in ancient India.

Recently, one of my stories, ‘The Girl in the Forest’ was selected as a winning entry for The Hive Publishers anthology, #Love. The book is available on Kindle and Amazon.

Read an excerpt of Amrita‘s book, The Untouchables

“When they reached the crematory grounds, pyres were still ablaze. Plumes of dark smoke rose into the sky in eerie shapes, like wraiths snaking their way up to another realm. As the two of them made their way through the funeral grounds, Maithili pulled her uttariya over her nose. The entire place smelled of ashen earth, melting flesh and burnt wood. Inebriated tantrics* clad in loin clothes red as blood, sat knees up on the ground in a drunken stupor. The chandalas*, or the corpse burners were there too. But no one paid any attention to the duo. And yet, Maithili felt like they were being watched constantly.” 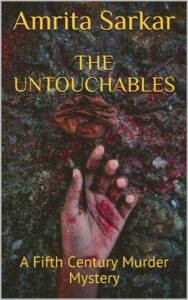 A dead body is found floating in the river Kshipra. A beautiful upper-caste woman chooses love over society, and is never seen again. A young widow is forcibly abducted to be sacrificed as a Sati, but disappears before she sits on the pyre.

Three heinous crimes in one night is a rare occurrence in an otherwise thriving and peaceful Ujjain, the second capital of King Vikramaditya, under the Gupta Empire. Are these three different crimes or pages torn out of the same story? Find out in this short murder mystery set in fifth-century India. 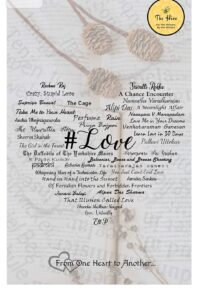 Love is known to pull your heartstrings like a puppeteer. And The Hive, along with twenty brilliant writers, takes up the role to bring you this concoction of love stories.

So join us as we read the unwritten story of a moonlight affair. The girl in the forest, whose chance encounter with whispering hues of a technicolor love, brought her out of the cage. Take me to your heart, Padmini says, her perfume reminding him of the daffodils of the Yorkshire moors, of forsaken flowers and forbidden frontiers. They walk hand in hand into the sunset, hoping to learn love in 30 days; him, thinking of balconies, booze, and breeze shooting with her, while she dances in the rain and whispers, love me in your dreams. He wonders if that’s an illusion called Love. Is love virtually even possible? But she refuses and screams, “Silly! It’s crazy, stupid love.”And they dance until they heave and declare, “Hey! You cannot just end love.”